People have been arguing since the beginning of time. The disciples fought over who was the greatest, and I wasn’t there, but I’m pretty sure there was quite the argument between Adam and Eve at least once…

“Salty” is the new “petty” and I think the reversed meaning of “bless your heart” is also being replaced. As Christianity becomes increasingly whittled down to fit into today’s society, a common thing we see is the phrase “I’ll pray for you” thrown out without any real intention behind it, primarily during an argument but also jokingly when speaking to a friend. 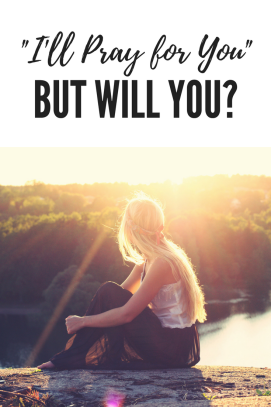 “I’ll pray for you” is plastered all over shirts and other merchandise with a sarcastic undertone that basically says, “I don’t like you/your behavior/your situation,” or a not-so-subtle way to say, “I’m better than you because I know Jesus.” Whether this is what you mean to say while walking around with a shirt that says “I’ll pray for you” in pretty script letters, it’s what’s being conveyed.

When you pray, don’t be like the hypocrites who love to pray publicly on street corners and in the synagogues where everyone can see them. I tell you the truth, that is all the reward they will ever get.” Matthew 6:5

Jesus does call on us to pray for our friends, family, and enemies alike, and maybe when you’re in the midst of an argument, you do use the phrase sincerely or when someone vents about their struggles you let them know you’ll be praying… and then you DO. That’s wonderful, and what prayer is meant to be. However, if you’re comeback or knee-jerk reaction to an argument or hate is “I’ll pray for you,” and you intend to “kill them with kindness” but you’ve never actually sat down and talked to God about the problem in private— don’t say it. Just DO it. Kindness and prayer come from love, not from anger or annoyance.

I promise, even if the relationship is never mended, your heart and mind will be through prayer and any anger you’ve felt will be washed away. Through speaking your fears, pain, and worries to Him, you will find a solution and forgiveness.
Don’t say it, do it.

When telling others,  “I’ll pray for you” becomes something it’s not, it puts a negative connotation on prayer and will cause people to see prayer as a jab in response to discord. Prayer can and does solve problems. Telling people you’re going to pray for them does not. Prayer is a conversation with God that may very well reveal that, in fact, you were the one in the wrong.

Whoever conceals his transgressions will not prosper, but he who confesses and forsakes them will obtain mercy. Proverbs 28:13

Maybe I’m wrong, though. Do you, or have you ever owned a shirt or other merchandise with this phrase? Did you see the meaning behind it as a sincere promise to pray for your brothers and sisters or as a sarcastic remark? I’d love to hear from you! 🙂

Jesus following, coffee loving, homeschooling mama. Teaching my children with the grace of God. This is where I share about our homeschooling journey, parenting, and everyday life. View All Posts

Jesus following, coffee loving, homeschooling mama. Teaching my children with the grace of God. This is where I share about our homeschooling journey, parenting, and everyday life.